Levelling up funds are targeted at Tory seats in danger

Lib Dems point out Chichester has areas of real deprivation and acute infrastructure challenges TOO! 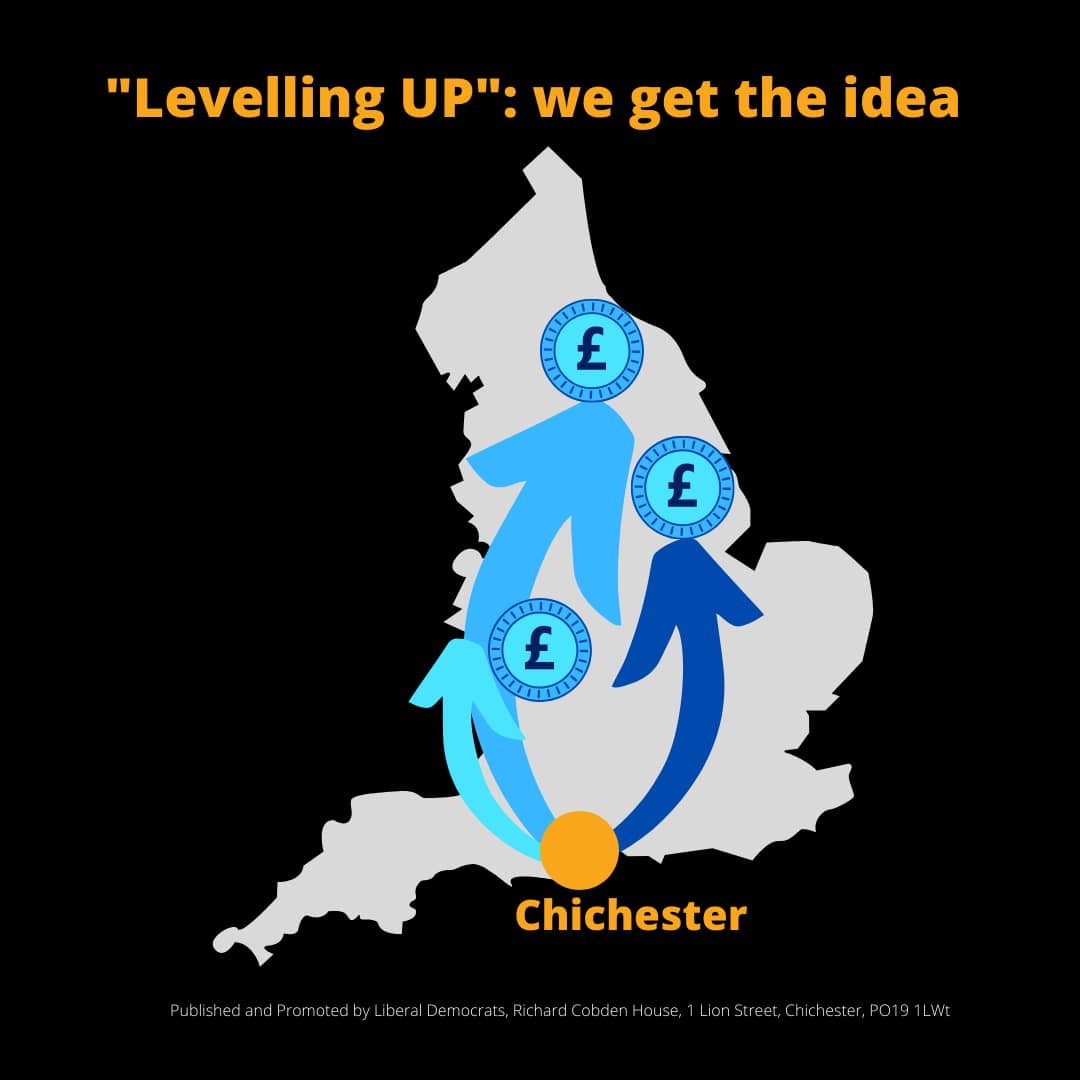 Chichester Liberal Democrats welcome the Government’s recognition of the importance of reducing regional inequalities, but the new Levelling Up White Paper fails to back the vision with money or powers and offers nothing to our area.

Levelling up is a genuinely welcome ambition, but under this government it is little more than a slogan.

The White Paper is long on rhetoric, but short on solutions and the “12 Missions” lack clarity and substance. The entire Levelling Up agenda is missing credible new resourcing, consisting largely of money recycled from previously announced spending commitments. In fact, in many areas, it only partially replaces EU money now lost to the regions. The proposed funding is clearly insufficient to make a noticeable difference and is typical of this government’s lack of substance.

Chichester Lib Dems believe that centralising political and economic power in London, as successive governments have done for decades, has brought us to the mess we are in now. Whitehall certainly does not know best.

For levelling up to mean anything, Westminster must give up power and put local communities in charge of policy and financial decision-making. We must shift to a more democratic, proportional electoral system so that every citizen’s vote counts equally and nowhere is taken for granted any longer – no more near one-party states ruled by either Labour or the Conservatives that get written off and ignored. We need a system that values everyone, one in which more people are listened to, have a stake in the process and will contribute to it. Regional and local government must be given real power to address the problems that hold them back and ensure funding decisions are made locally by people who understand their area.

Chichester District is unlikely to see any benefit from these proposals. In 2021 Chichester was placed in Level Three (the lowest level) of the “Levelling Up Fund” which provided funds for regeneration projects, which would be ideal for the renewal of Chichester’s Southern Gateway. Being placed in Level 3 means we have little hope of receiving any substantial grants.

Adrian Moss, Lib Dem leader said “to enable Chichester to benefit from the Levelling Up Fund in Chichester we needed an “Oven Ready” regeneration project and the likelihood of a Level 3 Council gaining the grant was very low. Interestingly other Councils in Sussex[1], with very small Tory majorities for the local MP, were in Level 1 and managed to gain substantial sums[2] not available to Chichester.”

The latest announcements in the Levelling Up White Paper do not make for more encouraging reading.

Kate O’Kelly, County Councillor for Midhurst said “The UK Shared Prosperity Fund excludes West Sussex from Phase 1 of funding for 2022. Chichester District Council is excluded as the Council has to work through West Sussex County Council. I can see very little in the White Paper that will benefit the people of our area.”

Jonathan Brown said “Levelling up must mean more money for the poorer parts of the UK, but that doesn’t mean the Government should neglect areas like Chichester, not least because we have areas of real deprivation and acute infrastructure challenges including roads, wastewater treatment and access to GPs, of our own. And funding is not enough:  without more powers too – without making communities responsible for their own future, the meagre resources the government is actually preparing to distribute will be wasted.

Again, this can be solved by a genuine commitment to opening up politics and empowering local government, local communities and individual citizens instead of treating them like electoral nodding-donkeys to be herded into line.”

Research suggests that cash is being directed at marginal Conservative Constituencies rather than those areas most in need. Liberal Democrats believe that as with so much this government does, the allocation of funds appears to be driven more by political calculation than a real desire to actually ‘Level Up the Country’. Forcing Councils to bid for grants from a central government-controlled fund will never deliver the real Levelling Up this country badly needs.